Think YOU'RE having a bad day? 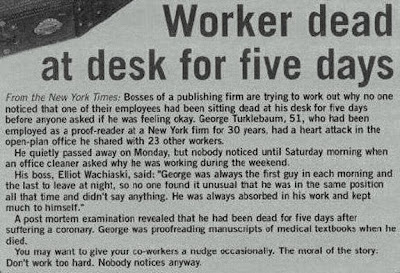 In a hospital's Intensive Care Unit, patients always died in the same bed, on Sunday morning, at about 11:00 am, regardless of their medical condition. This puzzled the doctors and some even thought it had something to do with the supernatural. No one could solve the mystery as to why the deaths occurred around 11:00 AM Sunday, so a worldwide team of experts was assembled to investigate the cause of the incidents. The next Sunday morning, a few minutes before 11:00 AM all of the doctors and nurses nervously waited outside the ward to see for themselves what the terrible phenomenon was all about. Some were holding wooden crosses, prayer books, and other holy objects to ward off the evil spirits. Just when the clock struck 11:00, Pookie Johnson, the part-time Sunday janitor, entered the ward and unplugged the life support system so he could use the vacuum cleaner.
Still think you're having a bad day?
The average cost of rehabilitating a seal after the Exxon Valdez Oil spill in Alaska was $80,000. At a special ceremony, two of the most expensively saved animals were being released back into the wild amid cheers and applause from onlookers. A minute later, in full view, a killer whale ate them both.
Still think you're having a bad day?
A woman came home to find her husband in the kitchen shaking frantically, almost in a dancing frenzy, with some kind of wire running from his waist towards the electric kettle. Intending to jolt him away from the deadly current, she whacked him with a handy plank of wood, breaking his arm in two places. Up to that moment, he had been happily listening to his Walkman.
Feeling better yet? No?
Two animal rights defenders were protesting the cruelty of sending pigs to a slaughterhouse in Bonn, Germany. Suddenly, all 2,000 pigs broke loose and escaped through a broken fence, stampeding madly. The two helpless protesters were trampled to death.
Feeling better NOW?
Terrorist Khay Rahnajet didn't pay enough postage on a letter bomb. It came back with 'Return to Sender' stamped on it. Forgetting it was the bomb, he opened it and was blown to bits.
You're welcome.
Crush du Jour: Chris Jilali 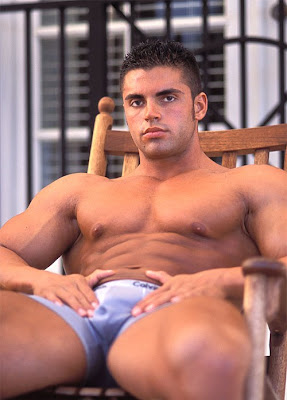 Email ThisBlogThis!Share to TwitterShare to FacebookShare to Pinterest
Labels: funny

I was starting to feel bad, and then BAM crush du jour!
Funny post....makes one think.

Can't do right to save my soul. Funny stories.

i'll try to remember these when i think a day can't get worse.

The seal one is funny. It should be titled "Most expensive meal ever!"

That said, my my my on the Crush!

The worked dead for 5 days things reminded me of an incident about ten years ago here in Providence.

They found a guy dead in his pickup truck. But here's the kicker, the truck had a parking ticket on it from two nights before.

The guy was slumped over and the cop writing the ticket never saw the body.

That's sad about the seals and weird about the dead guy at work. That with the letter bomb is instant karma!

As weird as it was, somehow the guy found dead at work doesn't surprise me, given the fact that he worked in a cubicle environment. Depending on the height of the cubicle walls, he could have been out of sight, out of mind to others. I think it may also say something about the fact that we have become only e-mail communicators with each other, instead of communicating face to face. At which time, perhaps this guy might have been found sooner.

Obliviously this is a hoax. After 2 days the corpse would exhale such a pungent stench that would be impossible to not be noticed and the decay that the body would have after five days in the warm office room would be beyond belief.

What really scares me is how easy is to fool people in this new internet-photoshoped world...