As I think back on this past weekend, the words frustrating and tense come to mind. It wasn't a 'bad' weekend per se, but it certainly wasn't one of our better ones.

I felt all weekend like Spouse & I were "out of sync", "on different wave lengths", not "on the same page", and this was frustrating.

We've done really well about living frugally since we moved here, knowing that we had not planned to keep our house in VA and therefore remain financially exposed if, for some reason, it didn't stay rented or needed some expensive repairs. So we postponed several purchases that we knew could wait until things were financially different for us. But with the settlement on the VA house this coming Fri, we've been talking about some of the postponed purchases and decided to do some shopping.

We went to 3 mattress stores and tried out a number of beds, as well as got helpful info from the salespeople. I am more sure than ever that what I really want is a TempurPedic memory foam bed, even though it is the most expensive brand. We sleep for about 8 hours every night, so there's no question about whether or not it would get used regularly. Yet Spouse remained unconvinced it is worth the considerable expense. Its not that he doesn't like the bed; he just doesn't want to "spend that much" for it. I don't understand this. You spend more time on your mattress than you do in your car, yet you'll spend 10 times more money on a car than you would your mattress? 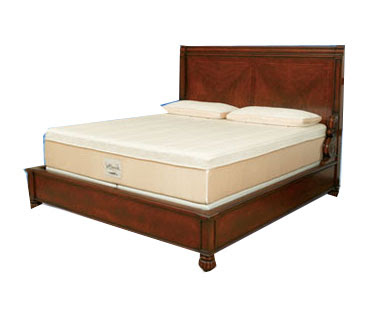 And its not that he's waiting for the mattress to go on sale, because they don't. 2 different retailers both told us that TempurPedic does not allow stores to price the mattresses less than what they sell for on TempurPedic's website. They never go on sale, and they are exactly the same price regardless of where you buy them. Spouse's indecision was frustrating to me since I am not undecided at all.

Another purchase we've been putting off is a large, flat screen hi-def TV. To give you an idea of our TV viewing habits, we typically watch TV every night from 7pm until 10:30 or 11pm. We have a 20-year old 19" TV (free) in our TV room, and a 7-year old 32" TV for which we paid $350. in our family room. Spouse has no desire for a larger, hi-def TV. He says "everything on TV is crap, so why do we need a big, hi-def TV to watch crap?" I remind him that although it may be crap, that certainly doesn't stop us from watching it for 4 hours every night. I'm not asking for a huge, 60" TV. I simply want a 37" or 42" hi-def TV. I believe it will make TV watching better and more enjoyable, especially the nature programs we enjoy and the design shows I enjoy. 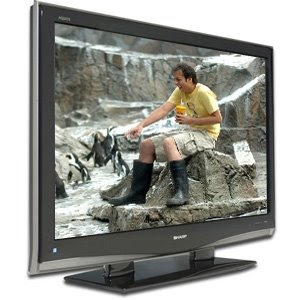 This weekend we saw a deal on a 46" hi-def 1080p LCD TV on sale 1 day only for $1,299. It was actually larger than what I had been looking for, but thought the price was very good. It would return to its normal price of $1,499. the next day, so a decision needed to be made. But once again Spouse would not agree. He felt that it was still too much money to spend on a TV. The conversation eventually was reduced to his complaint that the HDMI cable was not included, and so I found myself frustrated yet again.

Another possible purchase we've been discussing ever since we moved here 18 months ago is the small vacant not adjacent to our property. The lot is the same depth as our lot, but very narrow. We've discussed the possibility of purchasing it and building a garage (for our use) with an attached living space that would be rented by the week during the summer. There are many non-year-round homes in our seaside town. We are both interested in this possible venture, but the mood became quite tense as we discussed the price for a potential offer as well as the possible circumstances of the sellers. It absolutely escapes me why he would concoct all these various possible circumstances the sellers might be under when he has absolutely no knowledge of them.

Spouse thinks that if we are to make an offer, it should be for the price we feel the lot is worth, regardless of the list price, even if its only 50% of what the lot is listed for. I asked him why he thought the sellers might accept an offer of 1/2 the listing price. Rather than answer that question, he rambled on and on trying to justify his price. I told him there was no reason to convince me of the lot's value, and repeated my question about why he thought the sellers would even entertain an offer of 1/2 the listing price. The conversation did not end well, and I felt so frustrated I said calmly "Fine, let's do nothing. We won't decide on a bed, or a new TV, or the lot. Let's just decide to do nothing!"

Spouse left the house and I sat on the sofa watching the 19" low-def TV. An hour later Spouse returned (from K-Mart) and we decided to go out to eat and then go grocery shopping. Though not quite back to normal, we'd both calmed down and were pleasant to each other. Eating out and grocery shopping are 2 activities we always do together, and really seem to strengthen our relationship. Eating out gives us a chance to talk about whatever is on our minds, and grocery shopping is like a team-building exercise for us; the goal being to shop for the week in an economical manner. 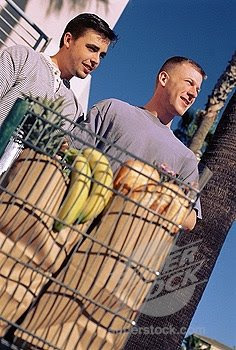 (This isn't us - photo snagged from Google.)

As we drove home from the grocery store Spouse asked "Do you still wanted a divorce?" I never said that I wanted a divorce this weekend or at any other time. That question is Spouse's way of acknowledging the unpleasant conversation that might have led others to shout "I want a divorce!", and checking to see if I am okay now.

In the past I've occasionally answered the question by saying "I'm not sure yet. Let me see if your life insurance is paid up first." This insinuates that, rather than a divorce where our assets would likely be divided in half, I might prefer that he have an "accident" that would result in his untimely death, whereby I would get everything. We both know the steps in this 'dance'.

But this time I decided to say something a little sweeter: "No, I love you too much to give up over something like this." After a short pause he responded in kind: "Good, because I don't want a divorce either."

We will certainly talk about a new bed, a hi-def TV, and the adjacent lot many more times. I believe we both know its not a matter of if, but when. For some reason he's not ready yet, and I can live without those things until he's ready. Its certainly not worth fighting over. As anyone in a long-term relationship can tell you, being in a couple involves compromise. You've got to pick the important battles and not sweat the small stuff.

When your love is deep and your commitment to each other is sure, you know you'll recover from unpleasant conversations and return to being "in sync", "on the same wave length", and "on the same page" again. 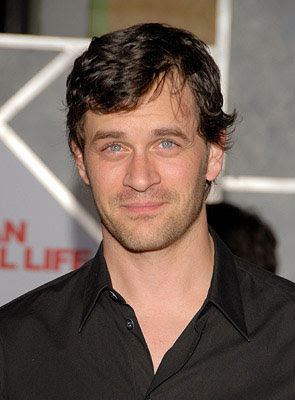 Awwwww ... that is so sweet. You two are so lucky to have each other.

I'm with you on all counts - the bed, the TV, and the lot! And I'm sure you will work them all out!

Brad and I used to do grocery shopping together all the time, but then we got busier and I did it for years, and now he mostly does it. We've recently switched stores, however, for a smaller-scale place and I think I may join him every now and again.

Have a good week!

Everytime AC and I start to disagree, I always start by saying, "I need you to know that I'm still trying to be on your side."

I'm sure I would be like spouse on the bed thing. That price is a rip-off! Money is the biggest minefield in a relationship, at least in my experience.

I think (just for grins) that once you should answer the divorce question with a big "YES!"

Just to get a rise.

1- The TV is a must. Shop this fall for a tv, 37 or 42 inch. There'll probably be some deals around then as new models come out.

2- the mattress thing? Check on the tempurpedic thing and "getting them wet". I think if they get wet the foam degrades, they lose support, and the warranty is void. You can probalby find a decent mattress at way less... and then can upgrade the mattress again in 5 years or so.

What a dilemma Emma! Shopping big time eh? Now you boys be nice to each other! We know how this goes as you and I have chatted about this before! If we we were always getting along and peachy then something would be wrong....xo